Flip through the 📕 menu pictures with the price list for Burrito Gallery (including kid, drink, gluten-free, happy hour, catering, and takeout menus when applicable).

Prev1 of 7Next
Click the Green Buttons to see other pages. 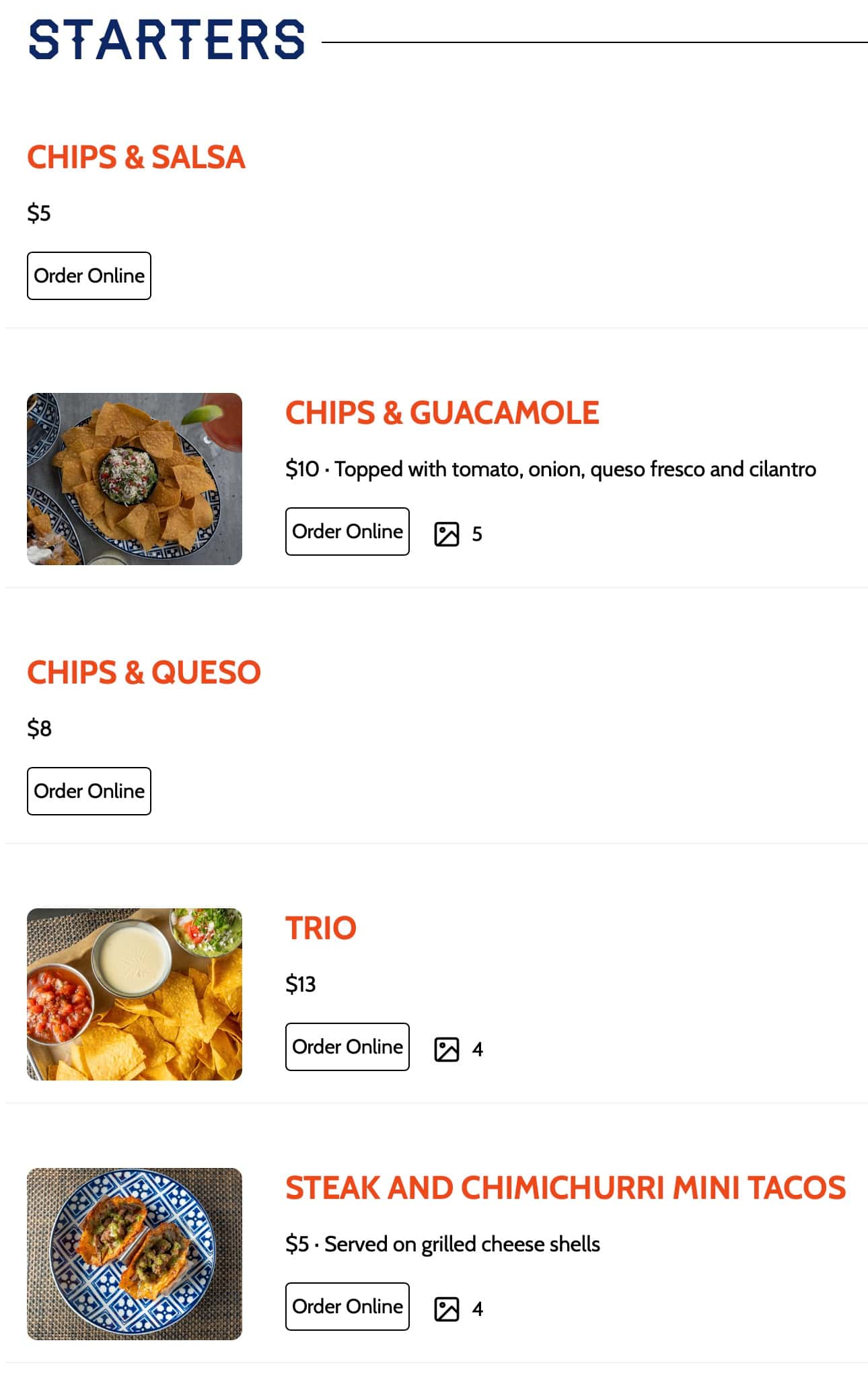 Prev1 of 7Next
Click the Green Buttons to see other pages.
Burrito Gallery menu items and prices can vary by location. View the prices for the Jacksonville Beach, FL Burrito Gallery here!
Disclaimer: Burrito Gallery Jacksonville Beach Menu selections and prices can vary by location and time of day and are subject to change. All prices are estimated and for reference only. Check with your local restaurant for current prices and menus. Restaurant Menu Price is an independent site and is not affiliated with any restaurant listed. Trademarks and logos are the property of their respective owners.

Jessica S.
1 month ago
What happened?! The past few times we have been the service has been horrible. They seem annoyed to even take your order, the bartender is rude, and the...

Shivam Shah
1 month ago
We got there after some time at the beach during afternoon and were famished. We got the nachos and burritos and weren't expecting the portion size they offered. First off, the nachos were excellent especially for the price! $8 for a massive plate of nachos? Much better than Moe's or chipotle especially if you're extremely hungry! The servers were extremely nice and welcoming too which is an added bonus!The only 2 downsides (why I took 1 star off) was that the chips in nachos were salted way too much on one side of each plate we ordered. As if they were salted twice. It was too much to eat. Secondly, when we ordered burritos, the cashier asked what we wanted for side other than Coleslaw, we weren't told that the other options would be charged. Instead, we were told it was free of charge. Just something to keep in mind which isn't a big issue since it was just $1 extra fro beans and rice with a good quantity of beans and rice

Joe B.
1 month ago
As long as you're prepared to spend, you'll have no issues here. The Burrito Gallery has some of the best burritos I've ever had. Ingredients taste fresh...

Jennifer O'Hara
2 months ago
This was my first time eating here. Very overpriced. Restaurant was dirty, tables and chairs not clean, I was given no silverware, my shrimp were frozen and manager basically called me a liar saying that they don't 'overcook' their shrimp but that he felt them all and they were 'warm'. Just to be sure I'm not crazy I asked the bartender if their blackened shrimp were previously frozen or fresh and he confirmed they are frozen and 'flash heated'. I wouldn't normally leave a bad review but it annoys me that the manager told me they were warm when they weren't and never came back to check if the new burrito they made was satisfactory. Management definitely needs to step it up. I was always curious about this place next time I'll pass. For a $13 burrito I expect more.

robert baird
3 months ago
I liked burrito gallery. Before it became something it isn't. I liked to build my burrito to order. (Like subway) but with the new location.... it appears they were trying to become a bar that serves mex food... but it seems they neglected the most important aspect. The food. My wife and I came in to escape to heat. And ordered drinks. Her (Sprite) I ordered a sweet tea. It tasted off... I only drank about a 3rd of the glass. I also ordered a burrito to go. Before I reached home I was very nauseous... and was violently sick.... After the nausea passed... and I'd cleansed my pallot... I wanted to put something on my stomach. So I ate the $12 burrito. Not only was it half the size as their previous. It was very bland. I couldn't differentiate the flavors of it's contents. The tortilla was pasty. I went looking for an old taco bell sauce packet... just to give it some flavor... I hope this isn't typical of burrito Gallery now. It was a n unpleasant experience. I don't think I'll be back...

Kay FL
3 months ago
Everything taste amazing especially Shrimp taco. I love their casual order style. The gentleman in the bar was so friendly.

Dave Joy
4 months ago
Our server was fantastic! Bree made sure we had everything we needed. Food was fresh, friendly staff, and everything was spotless. Highly recommended!

Tom T.
8 months ago
Recommended.This place is a fusion approach to Mexican food. A number of these places appear around the Jacksonville area.The food is very good. Figure...