Flip through the 📕 menu pictures with the price list for Milo’s Hamburgers (including kid, drink, gluten-free, happy hour, catering, and takeout menus when applicable).

Prev1 of 8Next
Click the Green Buttons to see other pages. 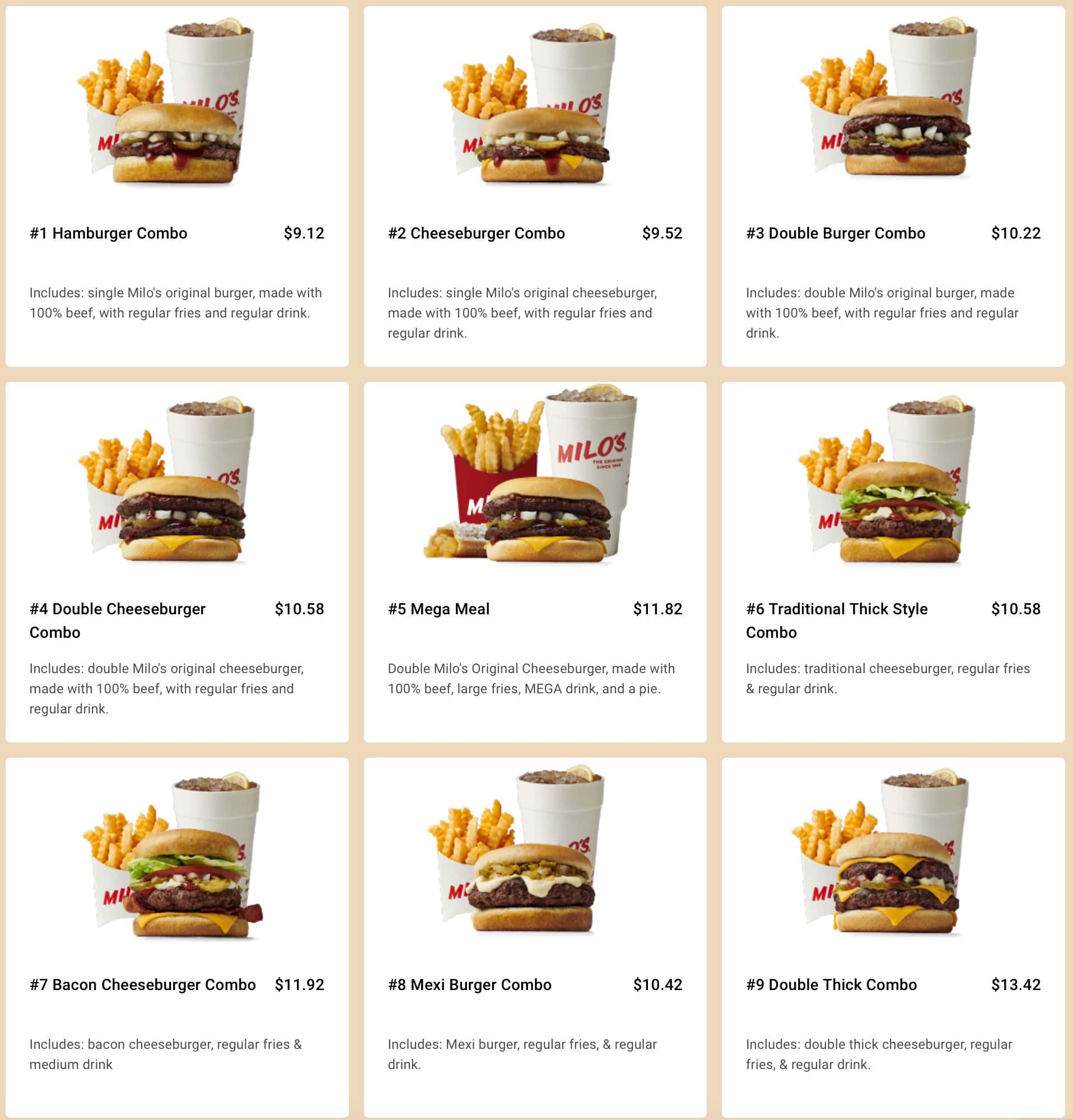 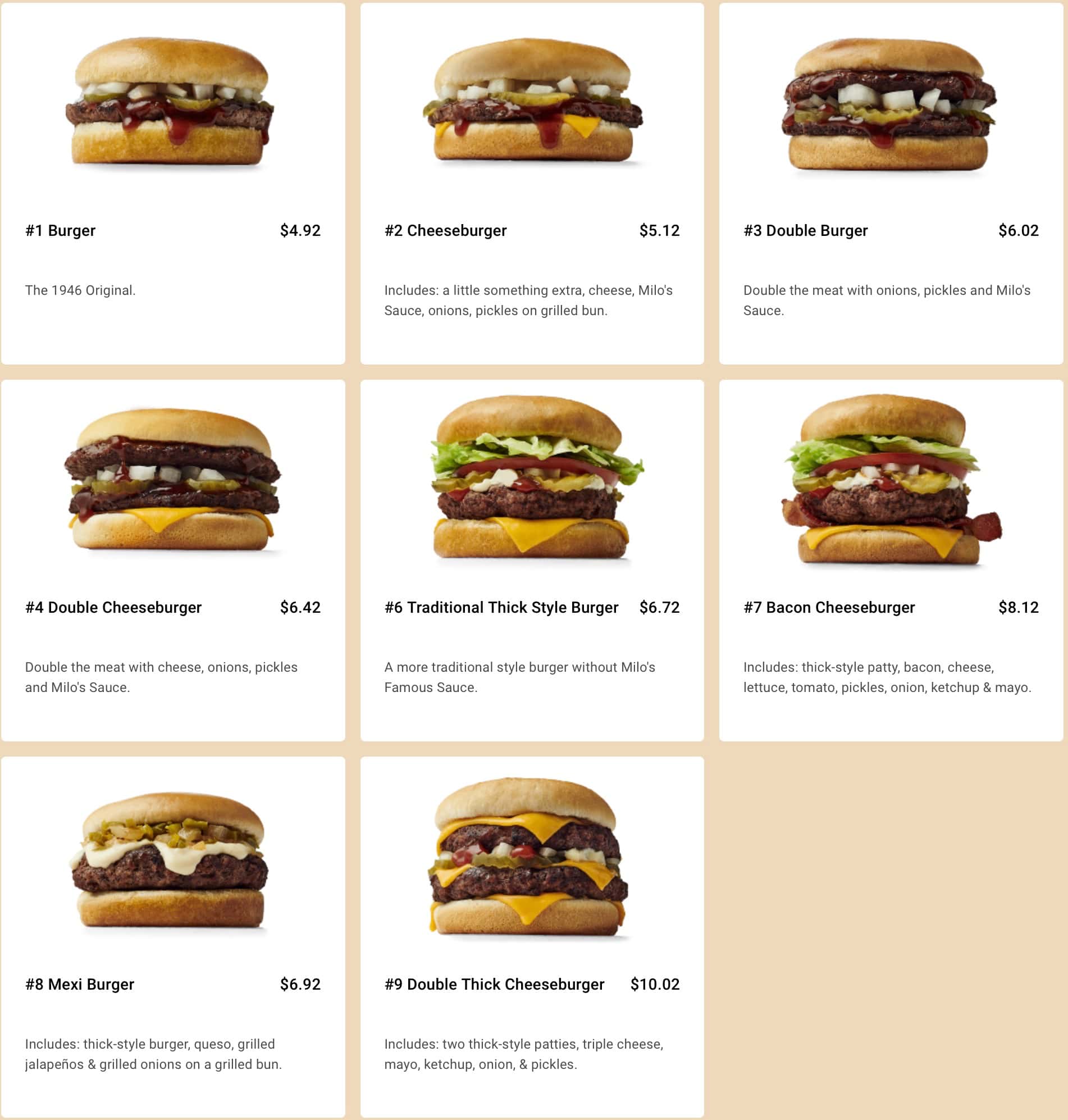 Prev1 of 8Next
Click the Green Buttons to see other pages.
Milo's Hamburgers menu items and prices can vary by location. View the prices for the Calera, AL Milo's Hamburgers here!
Disclaimer: Milo's Hamburgers Calera Menu selections and prices can vary by location and time of day and are subject to change. All prices are estimated and for reference only. Check with your local restaurant for current prices and menus. Restaurant Menu Price is an independent site and is not affiliated with any restaurant listed. Trademarks and logos are the property of their respective owners.

Lord Eldwyn
2 weeks ago
First time at a Milos. Messy squashed burgers slapped together. The tea did live up to the namesake. The fries were fresh, and hot. But the burgers were bland frozen patties, with this sauce that I can only describe as coloured grease. Not aweful but not a standout even in the world of state claim to fame burger chains. And it may have just been this location but slow unenthused service, and the bathrooms were deplorably filthy. I should have known though when eatery table was disgusting and had to clean it off as well as the seats myself.

Jay P.
1 month ago
Great food! Prices were good and service was on-par. We would definitely visit again!

Joan Hershey
4 months ago
My husband said his burger was okay. He really liked the Boomboom sauce!My chicken nuggets were awesome! Some of the best I've ever had honestly.The food was served hot which was so nice as many fast food places get lazy and serve things room temp but not Milo's!I would have tried a shake but that would have pushed the cost up another$5 and in my opinion $15 for lunch on the road is too much.This was my first Milo experience and I liked it! We don't have them where I live. I would recommend!

Troy Amer
5 months ago
Burger was really messy but wasn't bad. The sauces were practically tasteless. I enjoyed the cherry pie and lemonade, even though the cup was way more ice than drink, but the lemonade can be bought at stores at least. All things considered, the meal was very overpriced.

Elizabeth Wofford
5 months ago
My first Milo restaurant experience! Love the tea! The shakes are really good- thick & real! The fries were seasoned great. Definitely recommend the Double-O sauce! The family loved their burgers and chicken tenders, too.

Gracie Hearn
11 months ago
We have been dying to go here since we started drinking milos a couple years ago. Finally got the chance to stop by one and it was definitely worth the wait. The double O sauce is really good for the chicken nuggets! Hopefully they open a store closer to Florida.

Rob S.
1 year ago
Not really a fan of fast food, there are a few places that I do enjoy going from time to time. When I first moved here, there was a Milo's (this location)...

Gabe P.
1 year ago
I love a good Milo's experience! On my recent visit to this particular location, it was quite busy! I made the mistake of going during prime lunch hours....