On The Border Elkridge Menu

See the full ✳️ On The Border menu with prices for Elkridge, MD for 2022. Scroll down to see any breakfast, lunch, dinner and dessert menus available.

Flip through the 📕 menu pictures with the price list for On The Border (including kid, drink, gluten-free, happy hour, catering, and takeout menus when applicable).

On The Border Elkridge Menu

Prev1 of 18Next
Click the Green Buttons to see other pages. 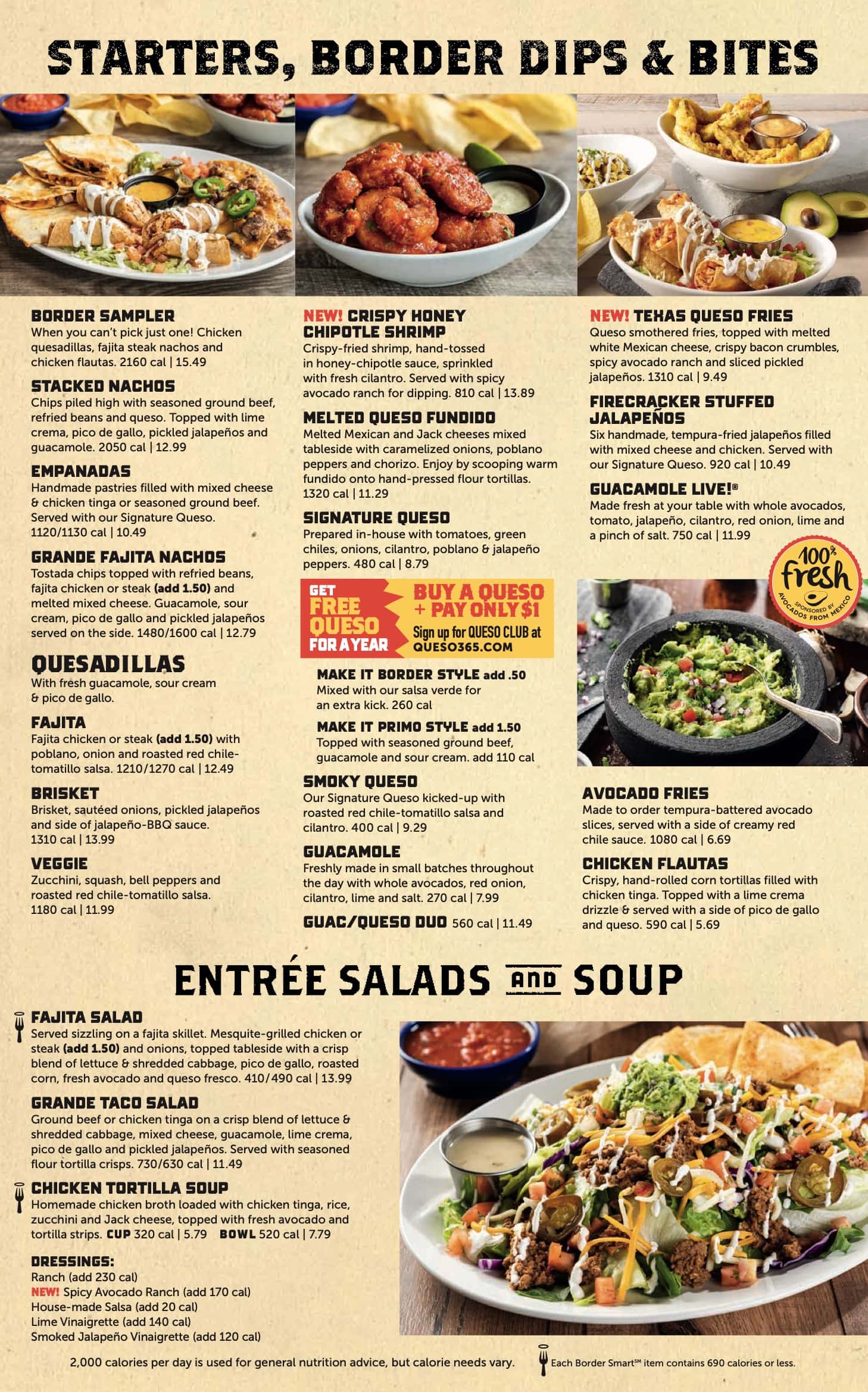 Prev1 of 18Next
Click the Green Buttons to see other pages.
Disclaimer: On The Border Elkridge Menu selections and prices can vary by location and time of day and are subject to change. All prices are estimated and for reference only. Check with your local restaurant for current prices and menus. Restaurant Menu Price is an independent site and is not affiliated with any restaurant listed. Trademarks and logos are the property of their respective owners.

Chris Marras
7 months ago
Our waitress was just not present for almost the entirety of our visit. After we received our food, we noticed we were missing things, after 20 min still no waitress. Noticed the manager intervening at another one of her tables for an unrelated issue, I took the opportunity to request our missing food from him directly. I won't name the waitress out of respect.And how was the food? Not good when you have to eat it cold.My wife and I ate quickly and stopped at Taco Bell on the way home. Spoiler alert; Taco Bell was better.

Jenna Marshall
7 months ago
Dined here with two other friends for dinner at 6:30 p.m. Figured it would be busy and was not surprised to have a 20-minute wait when we arrived to be seated, although it wasn't a full house of guests. However once seated, we waited an additional 15 minutes and still had not seen anyone come to our table. Went back to the hostess to ask if a server had been assigned to our table and was told by her that she had only just told them that we were seated at the table. When server arrived, we placed our entire orders, and then waited an additional 10 minutes for our two sodas and water to come to the table. Server told us she was new and had only been there about 1 month and sorry. From this point on, our server was nowhere to be seen except at other tables. While needing our drinks to be refilled, our focus changed from enjoying each other's company to what is going on here with the service. Meals were brought out by someone else running food from the kitchen, and we still did not have refills for our drinks or any silverware. The food runner eventually brought us silverware, but still no drinks despite having shared with him that we were waiting for them and food was lukewarm by the time we could eat it. After another 10 minutes, we took our own cups up by where staff was coming in and out of the kitchen area and asked for our drinks to please be refilled. Talked directly with our server who said she knew we needed them, and then she promptly turned her back to me and started taking an order from another table. Hostess ended up getting us the refills. The server, despite knowing we had issues at our table, still did not arrive to check in with us during the course of our meal. Only when we had finished our meals and been sitting and waiting for anyone to come back to our table, did our server make another appearance. This time she quickly brought us our checks and miraculously returned to collect money within 2 minutes of having given them to us. Everything about our experience was appalling. 2 of us have been servers before and just couldn't believe the lack of table service, the lack of attention, the lack of smiles or friendliness. Just excuses about why it should be okay that everything was so poor on every level.A few things to note:-The flavor of our food was good, despite not being hot by the time we had silverware to eat it. I feel bad for the kitchen staff that their front end is not pulling it together.-Our server did not convey to the kitchen we had a corn allergy at the table, and one of our dishes had to be returned because there was corn mixed in with the rice that she received.-The silverware appeared to have been washed, but they were wet with water spots and a piece of paper stuck to one of them.- The bathroom was neglected and dirty.

Chrissy D.
7 months ago
I would recommend for dine in but not to go I ordered nachos and had about 10 tortillas with some cheese on it. The sampler didn't come with the sauces...

Cliff Davis
7 months ago
I purchased a gift certificate from On the Border and received a $10 bonus gift certificate. I first tried to use the bonus certificate and was told that my minimum purchase did not meet the threshold. I attempted to use it two weeks later and was told that it had expired.My wife preferred another Mexican restaurant anyway so this made our weekend decision much easier. This company can keep the $10 because I won't be back.

Jane S.
8 months ago
Our server was in "training " and was fantastic! A pleasant, lovely young lady. The food was absolutely horrific. Ordered 2 appetizers; the Sampler and...

Sarah C.
8 months ago
Disappointing. Were there and waiting for take-out. Communicated with hostess and bar staff. Yes they are short staffed and the prep time was not an issue. Waiting for almost half an hour while the food gets cold in a corner is a problem. Could use some better organization and training for hospitality. We have 2 stars because we like the food but probably won't get takeout again from there.

Jim Spedding
9 months ago
Why two stars? Because in the past, even during COVID times, when we dine in the service is pretty good and the food is decent for what it is. BUT...over the past month and a half we have ordered carry out through the website 3 times.1st time: Order was 10 minutes late and once I got home, the order was wrong (Chicken Tacos instead of Ground Beef) (and ice cold).2nd time: Took 15 minutes standing in the pick up area to even be acknowledged by an employee, and order ended up being 25 minutes late...again.3rd time (this evening): Took another 15 minutes to even be acknowledged that I'm standing there, once acknowledged, order was scheduled for pick up at 6:15. It was 6:20 and I was told it be 15-20 more minutes. I said pick up was 6:15. I was told "We're behind." No apology, no smile, and like another reviewer said...it was a take it or leave it attitude. I finally got the order about 25 minutes later, made the 10 min drive home and again...Ice cold (probably from sitting before brought to me), AND THE WRONG ORDER...AGAIN!! (Veggie tacos instead of Ground Beef)Look...I get that the restaurant industry is short staffed...I really do...but 3x with the same poor time estimating, service, and cold food? Where is management? Ugh.

Gail B.
9 months ago
We visited for lunch on a Friday. The place wasn't crowded. Our server was friendly and not locked into our needs. Refills were hard to get. Extra napkins...