Flip through the 📕 menu pictures with the price list for Pizza Village (including kid, drink, gluten-free, happy hour, catering, and takeout menus when applicable). 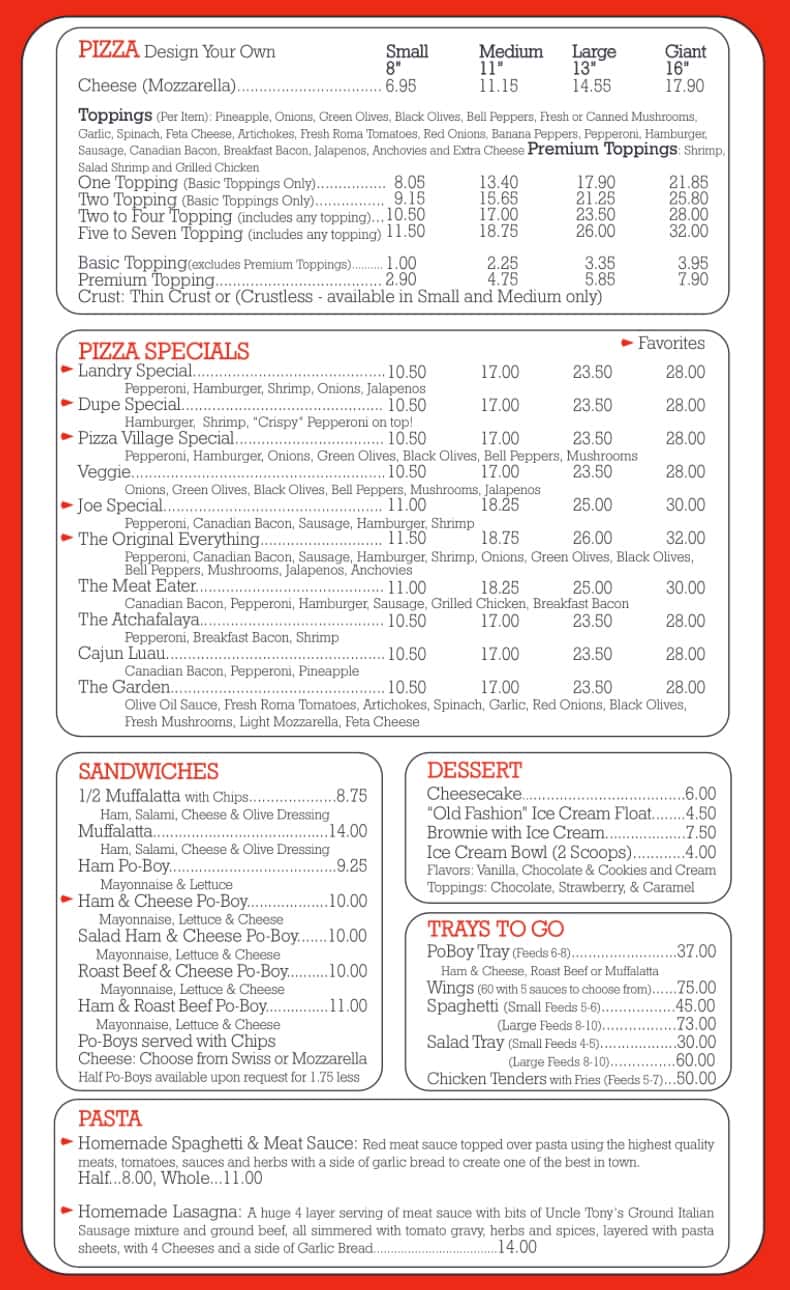 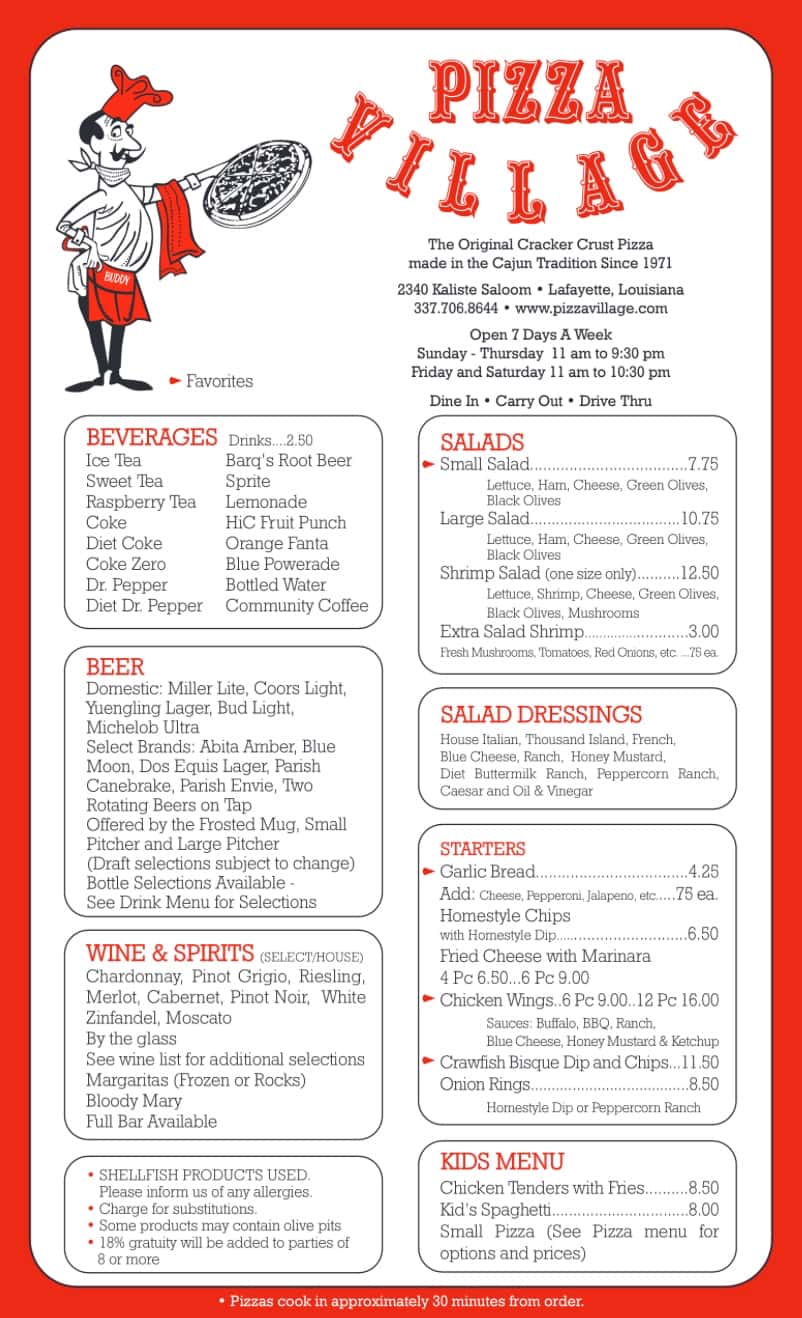 Pizza Village menu items and prices can vary by location. View the prices for the Lafayette, LA Pizza Village here!
Disclaimer: Pizza Village Lafayette Menu selections and prices can vary by location and time of day and are subject to change. All prices are estimated and for reference only. Check with your local restaurant for current prices and menus. Restaurant Menu Price is an independent site and is not affiliated with any restaurant listed. Trademarks and logos are the property of their respective owners.

Dennis Voss
1 month ago
This past Sunday my wife and I joined my daughter and her husband along with two grandchildren to help move our grandchild into the college dorm room. We went to lunch at the Pizza Village on Moss St. for lunch. The six of us ordered different items, pizza, salad, pasta and sandwiches. Since I'm from New Orleans I ordered what they call a roast beef and cheese po'boy sandwich. Please remember that my meal required no cooking. Everyone was served their meal except me. After everyone was half through with their lunch the waiter came by to tell me that the kitchen staff was still working on my sandwich. Some time later, after everyone else was finished eating, the waiter returned to say that the kitchen staff burnt mine and was going to make me another. I told him to cancel my order and remove it from the bill. As we were leaving the waiter handed us a 'to go box' with what he called my meal. I repeated that I didn't want it and to throw it in the trash. My wife took it with us. Around 5 PM I finally opened the box to eat half and found an oversized hotdog bun with two thin slices of beef and mayonnaise. 50 years in business and what they call a po'boy wasn't close. No French bread, no brown gravy, one small patch of lettuce, etc. The half I did eat made me sick later that afternoon so the other half went in the garbage. I hope my grandchild tells all her classmates where not to eat. It's very hard to believe that this place is still in business. I would give them a 0 star but I had to pick 1 star in order to post.

Paul Hudson
2 months ago
Absolutely love every kind of pizza they make. It's only thin crust. Also, have and amazing but simple salad.

Tressie Montou
2 months ago
Ordered a kids chicken tenders with fries and got raw chicken. Ordered the Landry as well, it's not what it used to be. The manager took the chicken tenders off our bill and a sorry but it doesn't make up for a child being served raw chicken. Service was average, nothing special.Edit. A manager reached out and did his best to make amend with the situation

Terrilyn Cormier
3 months ago
Don't recommend this place. The veggie pizza is just green and black olives. Was supposed to have mushrooms, bell peppers, and onions in addition to the olives, but nope. Just one slice of mushroom on each slice and an overload of green olives. Yea, they literally gave me a pizza full of green olives. Definitely not a veggie pizza. I added shrimp. They were super tiny. The olives were bigger than the shrimp. It had been over 20 years since I ate pizza village on Moss St. I don't remember why I never went back, but this is definitely the last time. I don't like to waste food, so I ate it. Luckily it was only a small pizza.

Katherine B.
6 months ago
pizza village is always so good i live a little bit away but it is so worth the drive i have never had better pizza

Clayton Daigle
7 months ago
Great pizza! Had the Landry's Special. It was delicious. The crunchy cracker crust is so great. It doesn't fill you up as much as other pizzas because of the thin crust. But it tastes too good to care.

A'Kimberly S.
1 year ago
This place came highly recommended but it was just okay to me.We ordered a large pizza over the phone. When we went to pick it up it was a medium.

David A.
1 year ago
Met up with Todd Hebert and Byron Blanchard for dinner last pm. We hit pizza village for old times sake. It was the after Teurlings football game hangout...