Flip through the 📕 menu pictures with the price list for Solazo Taqueria (including kid, drink, gluten-free, happy hour, catering, and takeout menus when applicable).

Prev1 of 3Next
Click the Green Buttons to see other pages. 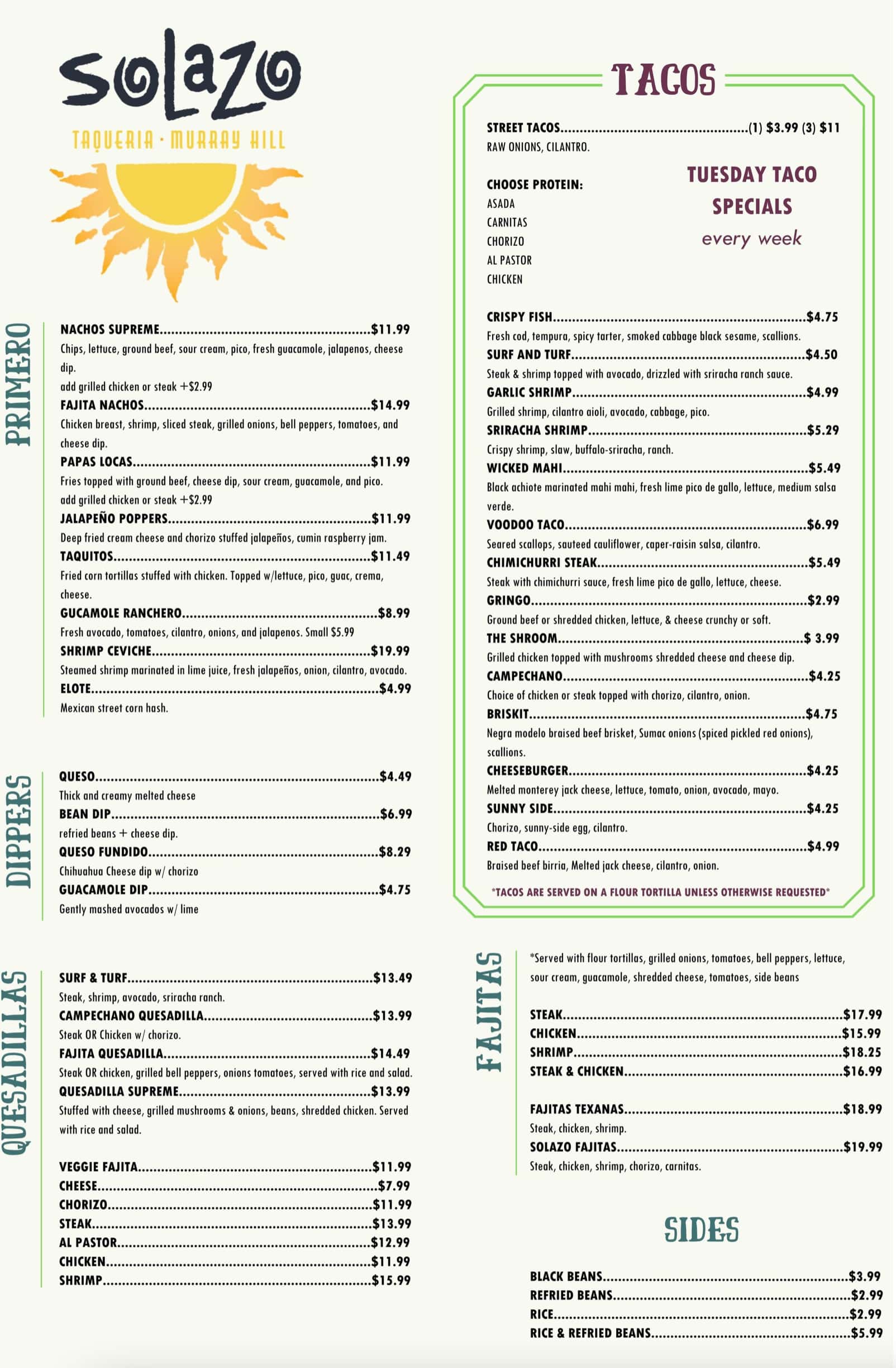 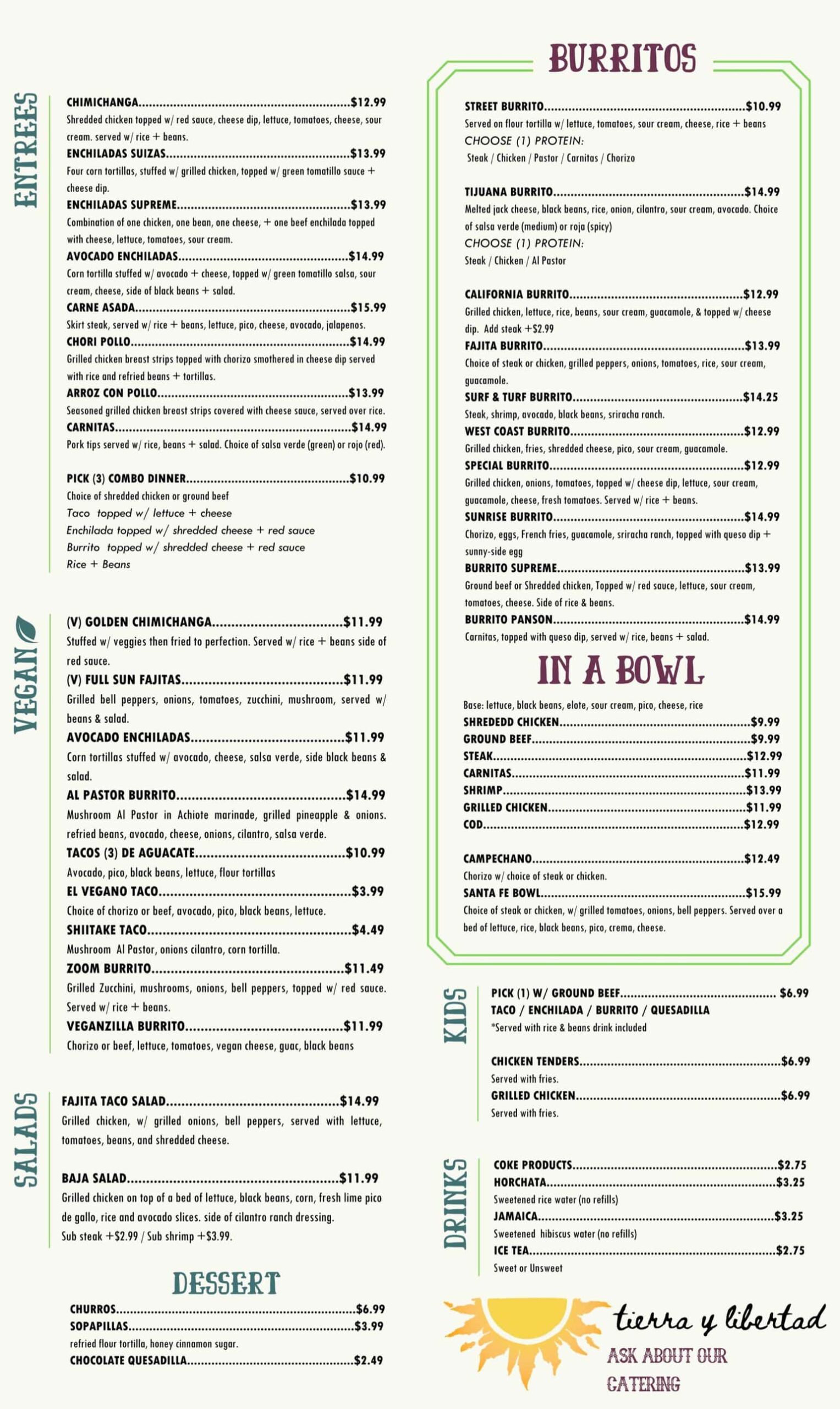 Prev1 of 3Next
Click the Green Buttons to see other pages.
Solazo Taqueria menu items and prices can vary by location. View the prices for the Jacksonville, FL Solazo Taqueria here!
Disclaimer: Solazo Taqueria Jacksonville Menu selections and prices can vary by location and time of day and are subject to change. All prices are estimated and for reference only. Check with your local restaurant for current prices and menus. Restaurant Menu Price is an independent site and is not affiliated with any restaurant listed. Trademarks and logos are the property of their respective owners.

All American Hot Dog and Sandwiches

Shawn L.
2 months ago
Another great visit last week. They now have an official drink menu with happy hour specials. We love this place and keep coming back week after week....

Gina Hughes (G Hughes)
2 months ago
Yum! Checked out this place while visiting family. The portions are large. My husband's burrito was enough food for two people. The street tacos are a good size so two or three are more than enough. I had two vegan tacos and they were great. They have several vegan options which aren't just lettuce and beans. They use vegan chorizo and beyond beef. I was a big confused about the vegan chorizo because it tasted too real. The staff was so friendly and wait times for food was very reasonable. Id definitely come back.

Leah A.
3 months ago
We decided eat at Solazo Taqueria on a date-night since it's in the neighborhood and we were in the mood to try something new, Mexican and close. Although...

Mark O.
4 months ago
Met up with some friends for dinner and margaritas here at Solazo tonight and it was OK, definitely missed the mark on a couple of things but in general it...

Michael Liddell
6 months ago
When we saw this place pop up we were a little sceptical, there are already SO MANY Mexican/Taco joints in Riverside/Murray Hill but this one has quickly became my go-to lunch spot, and probably favorite Mexican restaurant in a 20 mile radius. Literally everything we've tried from the menu has been great. You'll see a lot of reviews mention the salsa and they're spot on, it's house made and the perfect amount of heat, actually our server mentioned that all sauces are house made. No frills just basic great tasting Mexican food, and at a great price. They also have a very good draft beer and canned/bottled beer selection.

Hannah S
6 months ago
We had the shrimp/steak/chicken fajitas. I got horchata and my boyfriend had a beer. Service was excellent and fast. One waiter tended to the whole dining room. We were impressed and can't wait to go back.

Josh Angel
7 months ago
Recommended to us because we like New Mexican food (which looks like but is quite different from Mexican food). While not quite New Mexican food, it was close enough to scratch that itch for us.We typically don't eat Mexican food in Florida because it's so bad, but we agreed that this was some of the best we've had outside Albuquerque.I got their enchiladas with red sauce, and while the red sauce wasn't the traditional New Mexico Hatch chili sauce, it was very good. Flavorful with just a touch of heat.My wife got their street burrito, chicken, and she agreed it was the best Mexican she'd had in Florida. Our daughter got Dos Tacos and mumbled that it was good, which is the same as enthusiasm in most people, so all the food got pretty much glowing reviews all around.Complimentary chips and salsa were great, and our server was polite and efficient.This is now the only Mexican restaurant we will eat at in Florida. Highly recommend.

Lynnsey Norris
9 months ago
Pictured: Elote (street corn hash), shroom taco, crispy cod taco, and campechano taco (with steak).The elote was very good. Unpictured is the delicious sauce that fills the bottom. It's like a creamy lime sauce, very good'use a spoon.My favorite taco of the bunch was the crispy cod, the spicy tartar sauce is delicious. The batter they use is soft tempura I think, and it's not as crispy as I thought it'd be. Which is fine, made it very easy to chop through all the ingredients.The shroom taco has chicken in it too, it's well seasoned. The taco itself is loaded with cheese and a creamy sauce, really messy and delicious.The campechano is filled with chorizo, raw onions, and a ton of cilantro. I was surprised how you really couldn't taste the cilantro, since I really don't like cilantro, I think the onions and meat really help balance it. The steak was tough, but cut into such small pieces (bite sized!) that it wasn't a problem.