Flip through the 📕 menu pictures with the price list for Von’s 1000 Spirits (including kid, drink, gluten-free, happy hour, catering, and takeout menus when applicable).

Prev1 of 7Next
Click the Green Buttons to see other pages. 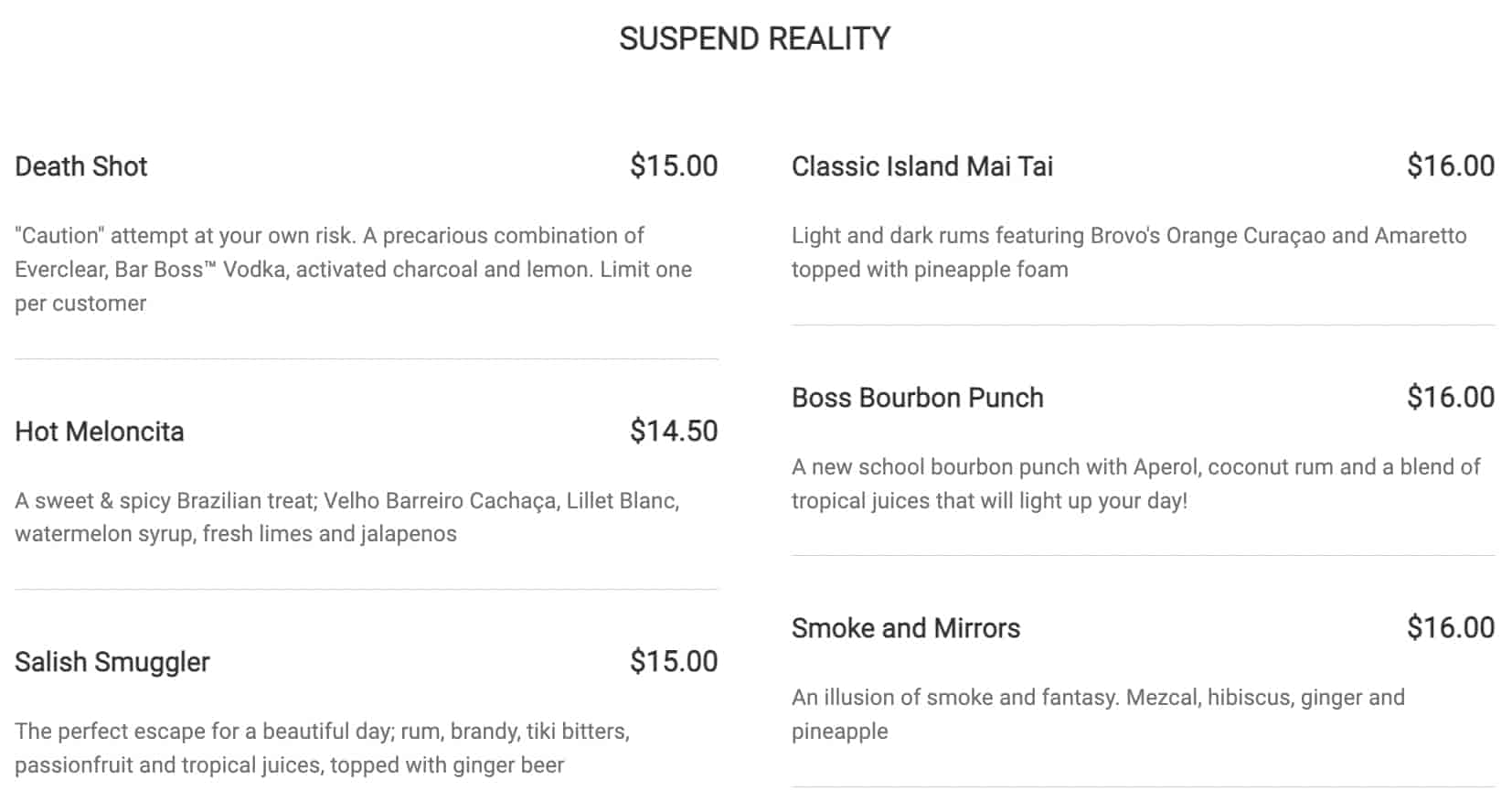 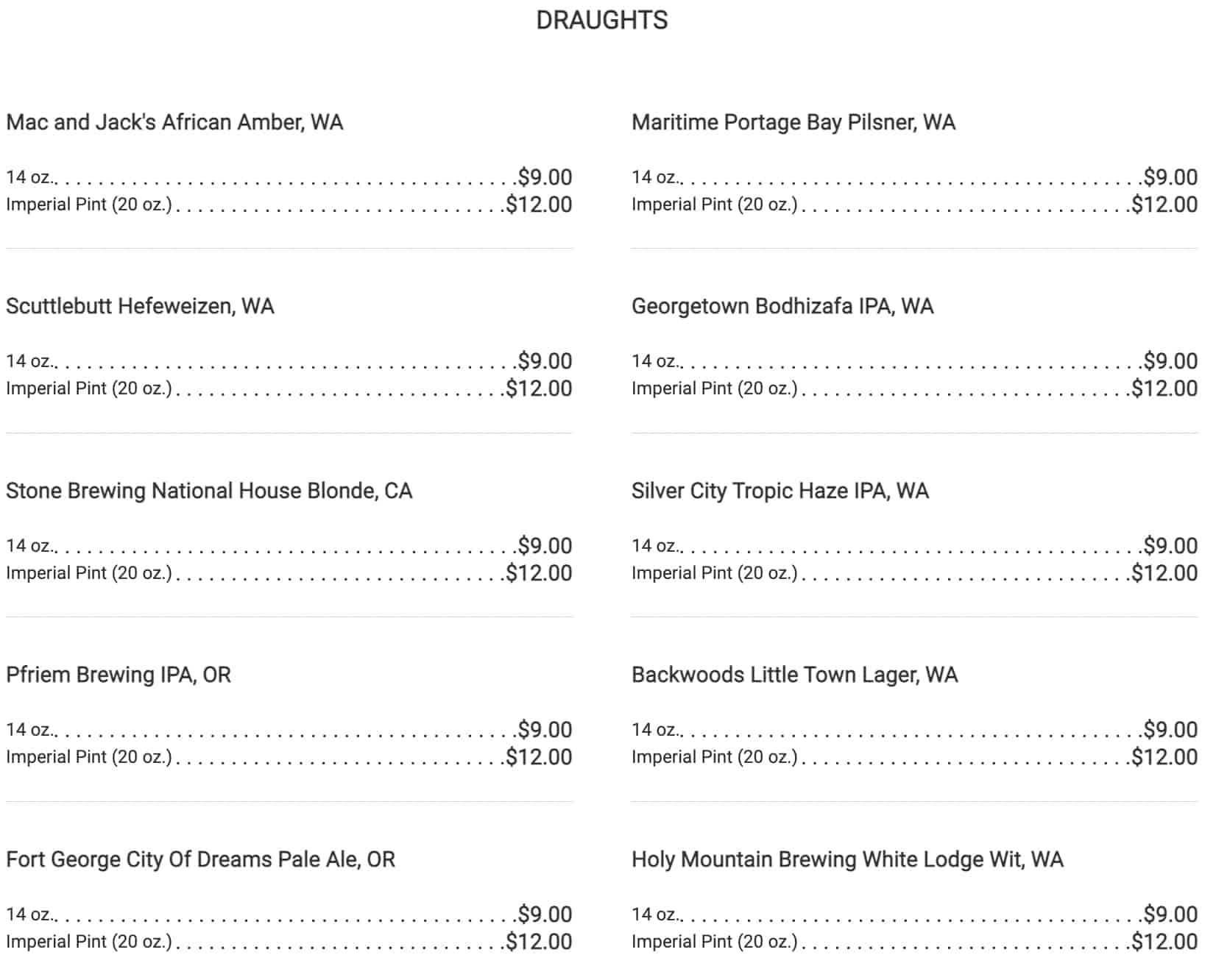 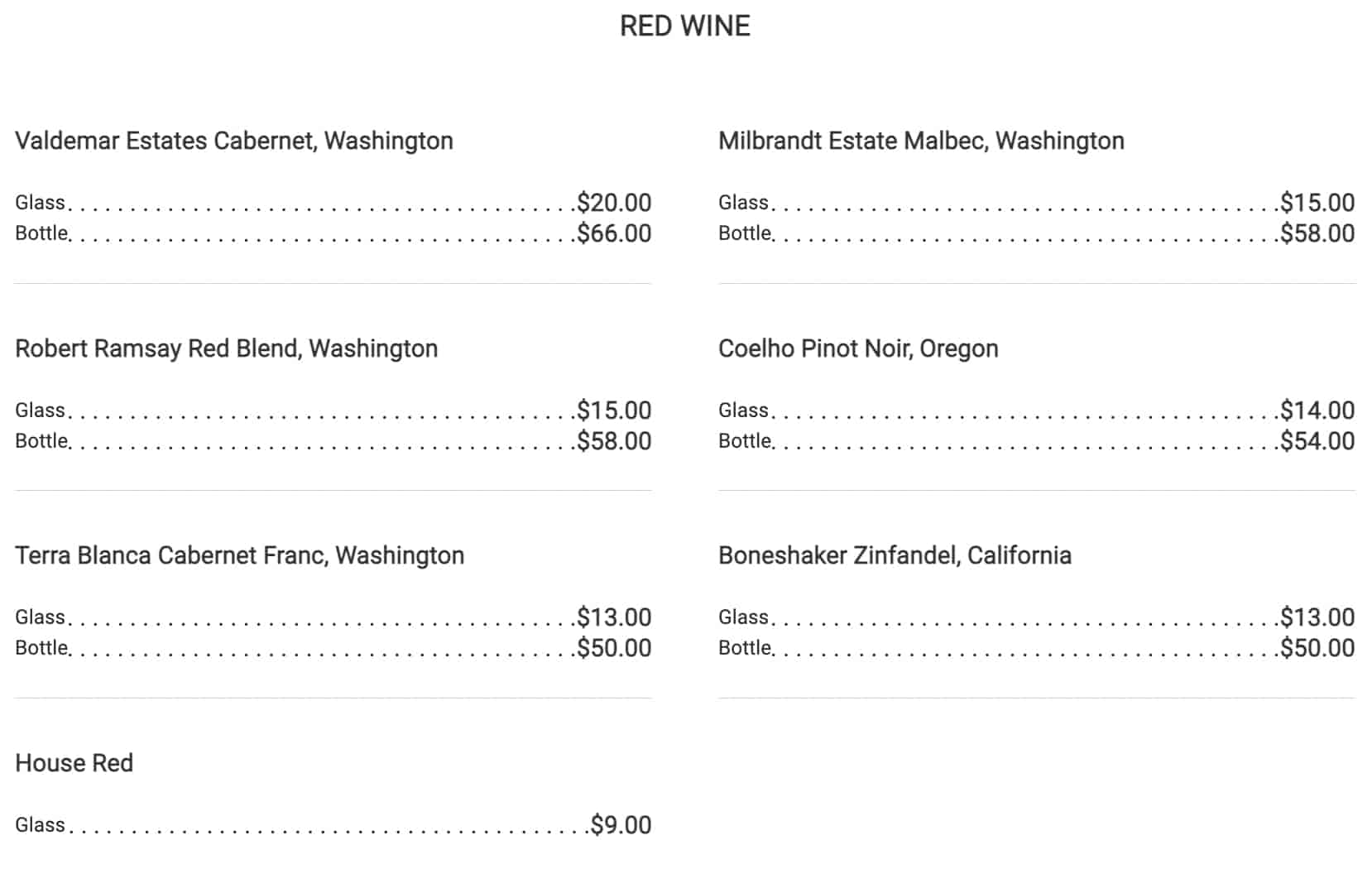 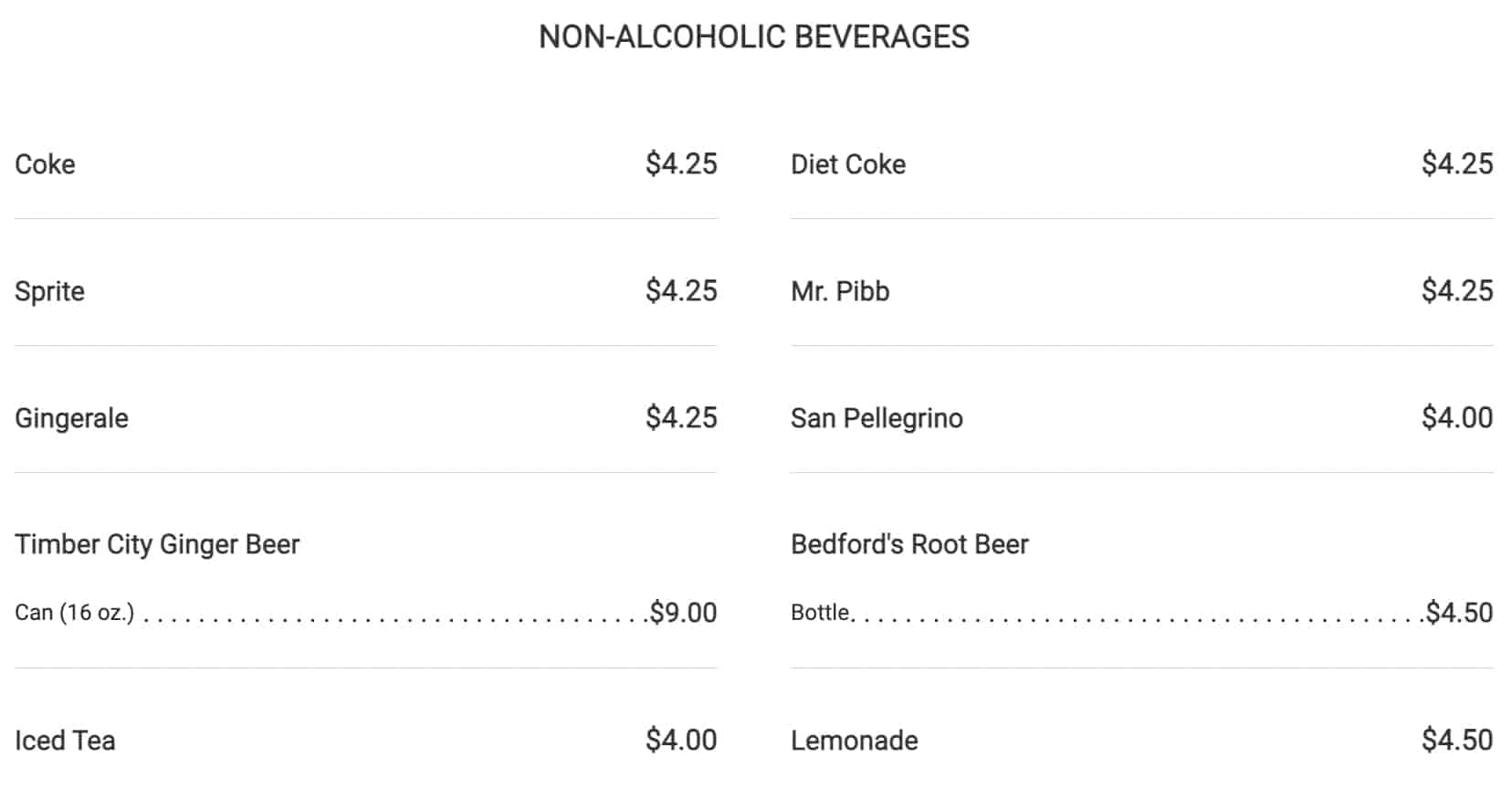 Prev1 of 7Next
Click the Green Buttons to see other pages.
Von's 1000 Spirits menu items and prices can vary by location. View the prices for the Seattle, WA Von's 1000 Spirits here!
Disclaimer: Von's 1000 Spirits Seattle Menu selections and prices can vary by location and time of day and are subject to change. All prices are estimated and for reference only. Check with your local restaurant for current prices and menus. Restaurant Menu Price is an independent site and is not affiliated with any restaurant listed. Trademarks and logos are the property of their respective owners.

Tarren Bruce
1 month ago
I fell in love with this place. The staff is very friendly and helpful. We sat at the bar and had the mixologist craft us some wonderful drinks. They were phenomenal to say the least. The food was great. They make their pasta on site.The dishes we had were great. Its priced right and all. We will definitely be back when we are on that side of the country.Highly Recommended!!!

Leeza Dunaevsky
2 months ago
Do NOT order online from here.I can't tell you the level of disappointment I experienced last night. I ordered 3 items, 2 food items and 1 cocktail, to go. My order was done in only about 20 minutes, which was awesome, but then we had to spend an additional 30 minutes at the restaurant waiting to for the drink that I ordered because apparently 'the kitchen and the bar don't talk to each other'. Why 30 minutes for one drink though? Because after telling them 3 times that I ordered a Bramble, they forgot and tried giving me some espresso drinks instead. Oh, and once I did get the drink I ordered, I had to double check that they gave me the right one because, I kid you not, the amount of liquid in that to go bottle was equivalent to maybe two shots' they said it was correct' $14 for a mixed drink that fits in a thimble. Anyway, I don't like to write bad reviews but I feel totally good writing this one cause people should really know what I rip-off it is.The reason for the 2 stars is that I live in the area so it's convenient and the food is actually pretty decent. Pro tip: the kid's menu is actually a ton of food. I don't have a kid'I order from that menu for myself because those are some of the only items not priced with a margin of like 400%.

Kim Lavoie
7 months ago
Both my Chowder and Cocktail were spot on. I had the Salmon Chowder and Champagne Mango Margarita. The chowder was probably the best I've ever had! The soup's consistency was perfect, not to thick or too thin, and the chunks of salmon were cooked to perfection. Each bite was an experience to savor. The Margarita was special too, the chili lime salt on the rim was super yummy, and I loved the mango champagne combo. A truly memorable dining experience.

John Saenz
1 year ago
Von's has got to be one of the best dining establishments in Seattle. I only get to Seattle a couple times a year and Von's is a guaranteed stop each time. They have a diverse menu of such great food. Their Salmon Chowder is maybe the single best dish I have ever had at any restaurant. The service is always great and the staff friendly. I have been going to Von's since the days of the Roosevelt Hotel and it always exceeds my high expectations. The atmosphere is fun and welcoming. A great place for a date, a casual drink or a family meal. It's proximity to the waterfront and Pikes Place make the location part of an amazing dining experience.

Rachel Wright
1 year ago
First off, the food is amazing. The atmosphere, the service, the drinks, etc. just add to the greatness of this place. There is such an extensive list of drinks, it's definitely hard to pick one! They make their sourdough bread/pasta in house! I got the pesto pasta and it is probably in the top 10 on the most delicious foods I have ever had. My husband got a burger which also looked and smelled amazing. I will definitely be coming back to this place regularly when I move to the Seattle area this summer!

Matthew M.
10 years ago
Came here on a late night while on vacation. The service was very ehh. Slow and not very nice, but who knows they prob deal with aholes at the time we...

Kristine H.
11 years ago
I'd seen this place a multitude of times while downtown. Coincidentally, a friend came in from out of town and some of her former co-workers were meeting...

Meghan P.
13 years ago
The large, spinning drink wheel is officially the coolest thing I have ever seen at a bar! And that is saying a lot! This huge 6 ft in diameter (more or...